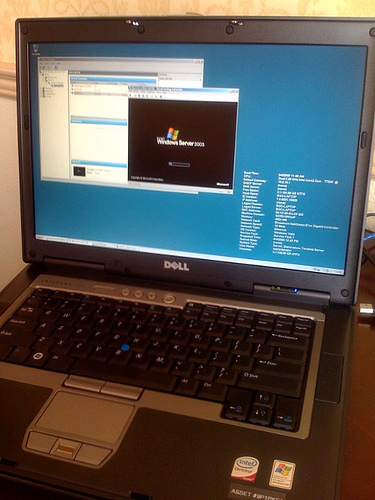 My new work laptop for Quest is a Dell Latitude D830 running Windows XP. I gave XP another shot, and after a day I’d switched back to my Macbook Pro. I needed to use some of the XP-only apps, so I virtualized the XP image, and set about turning the Dell into my mobile datacenter.

Windows 2008 Standard installs fine, but doesn’t have drivers for:

Hyper-V works great so far.  It’s no replacement for VMware Workstation or VMware ESX/VI.  Had a few minor problems, but nothing big:

I’m loving Hyper-V so far, though.  It’s not as good as ESX, but it’s a heck of a strong product for a first version.

Brent Ozarhttps://www.brentozar.com
I make Microsoft SQL Server go faster. I love teaching, travel, and laughing. I live in California with my wife Erika.
Previous Post
Bought a Wii – and then gave it away
Next Post
Great SQL Server newsletter