GTD: Why Things Have Been Quiet Around Here

A few months ago, I had The Idea.  I wanted to conduct SQL Server training on a cruise ship.  I emailed a few buddies and offered to start a company called SQLCruise with them, and out of three friends, only one could say yes.  I don’t have anything against the two who said no.  I knew exactly how they felt – one of them came to me a few months earlier, had a killer idea for a company, and I had to say no because I didn’t have the time myself.  I said no to all kinds of things lately, including writing blog entries, because with the job change, I just didn’t have the time for the last several weeks.

But what does “having the time” really mean?  We’re all overworked – how can anybody have the time for anything new?

I use a system that means at any given moment, I am completely comfortable that I am doing exactly the right thing for that moment.  It also means that anything I’m NOT doing can be safely ignored.  It just doesn’t matter, because it’s not #1 right now, and I can only do one thing right now. 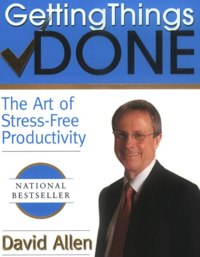 The Other Good Book

David Allen’s task management philosophy is detailed in his book, Getting Things Done.  It’s a deceivingly simple set of guidelines that, if followed, will let you feel completely at peace with your task choices.  I hate bullshit self-improvement books.  I don’t listen to hypnotism tapes.  I don’t attend cheerleading seminars.  But GTD – I just can’t imagine being successful without it in my life.

Right now, as I read this, I’m sitting on an airplane, blogging, and I know its exactly the right thing for me to do.  I’m disconnected from the web, so I pulled up my Disconnected-Work task list and started chugging through tasks.  I reviewed a client’s performance data, wrote a blog post about my experience running SQLCruise, and then started this here post about priorities and choices.  When I land and get to a hotel with Internet access, I’ll switch contexts and hit my Connected-Work task list.

At around 5PM, when I’m not on the road, i leave my home office and my tasks behind.  I walk Ernie (our dog), get the house ready for Erika’s return from work, and leave the workday problems behind.  I’ll still check email from my ozone when we’re not doing anything, and I’ll respond to quick questions, but I won’t do work.

And I won’t care.

I won’t stress out about things I have coming tomorrow, won’t get worried about what a client’s server is doing, won’t work late trying to “get ahead” – because there’s no such thing.  As a knowledge worker, I’m going to be behind for the rest of my life.  The better I am at accomplishing stuff, the more work people will give me.  At 5PM, I have to change contexts because I won’t ever be caught up in my home life either.  There’s always more things I should be doing at home, or just flat out relaxing.  I don’t want to feel guilty while I’m just hanging out with Erika, watching Project Runway or taking the dog to the park.  There’s nothing wrong with these lazy habits.

Relaxing keeps you fresh.  Relaxing means you have spare capacity – and if you suddenly need to sprint to accomplish something important, you can work harder for a while to take advantage of opportunities.

When opportunities (or more often, assignments) come up, I make two decisions.  I put them in a context (a to-do list organized by where I’ll do the task, like at work, at home, out shopping, at budget time, etc) and assign them a priority.  My priorities are High, Medium, or none, and I only put something in High or Medium if I think I’ll accomplish it within the next 1-3 weeks.  If I won’t finish it that fast, then I’m not going to bother picking an exact order.  Instead, I go back into my task list every Friday to see which tasks need to be deleted or reassigned to someone else. Some tasks just never get done, and eventually get deleted when they’re no longer relevant.

While Tim and I were organizing SQLCruise, I had a task list with a SQLCruise context.  I worked on those tasks between waking up and going to work, and then during my lunch hour.  In a perfect world, I would have accomplished every task on the list before we set sail, but this isn’t a perfect world. (I got paid to take a cruise, so it’s close to a perfect world, though.). Here’s what my task list looked like after the cruise: 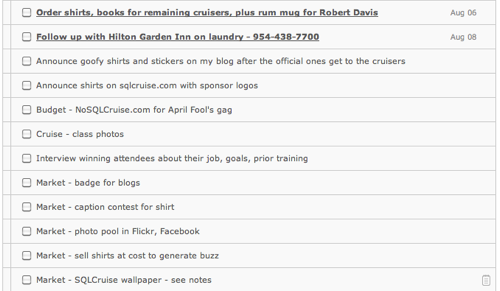 Even today, there’s still plenty of work that would have improved the quality of the cruise for the attendees, the sponsors, or myself.  I just couldn’t do it in time – and that’s okay.  I’m at peace with that.  (Thankfully, some of them even took care of themselves – the Hilton Garden Inn found my laundry and shipped it to me, and we got class photos on formal night.)  The only way I could have pulled off every task was to let work intrude into my time with Erika & Ernie, to work less, or to sleep less.  I already let my work intrude into Erika’s time during the lead-up to the cruise, and my relationship with Erika suffered.  If I’d have worked any more, I probably would have lost her!  As a knowledge worker, I have to be comfortable with letting tasks go undone – or losing touch with the people I love. 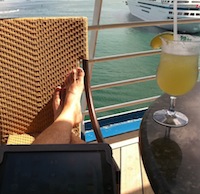 Getting Things Done in Key West

Contexts and priorities are important because they let you wall off portions of your life.  When you get the opportunity to do something cool, you have to know where it ranks in relation to everything else you’ve already said yes to, including your family.  I know that at 5:30PM, there is nothing more important than me greeting Erika at the door and giving her my undivided attention to find out how her day went.

Inside a context, when I say yes to something and prioritize it, I need to know that it’s the most important thing I can be doing at that moment in time.  That’s where GTD’s bigger philosophies like 50,000 foot lists come into play.  For more about how it works, check out David Allen’s book Getting Things Done.

That’s why some of my close friends said no to SQLCruise – they had already made big-picture choices and commitments to balance their work and life.  I could never be upset with people who say no to things – I applaud that word no, and it’s the key to keeping yourself and your loved ones happy.  I told my blog no for a while, and I’m looking forward to ramping back up.