Why Your Sysadmin Wants To Virtualize Your Servers

DBAs and developers: right now, your Windows admin is talking to management about all the time, money and hardware he can save by virtualizing servers.

He might not start with SQL Servers first, because frankly, he’s scared of database administrators.  DBAs only have one answer: “No.” 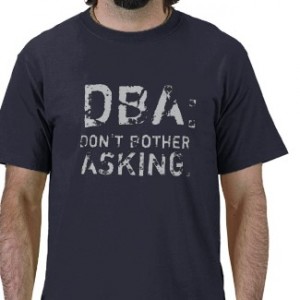 Your sysadmin knows how you roll.

I know, because I used to manage VMware servers, and yes, we had some virtual SQL Servers.

To understand why it happens, it helps to be armed with knowledge about why virtualization really does make sense for a lot of servers.  Today, I’m going to cover some of the more popular benefits.

Virtual Hardware Drivers and Firmware Aren’t Tied Into the OS

Virtualization abstracts the hardware away from the operating system.  When you run VMware ESX on an HP BL460c blade, for example, the virtual servers running inside ESX don’t need any HP drivers.  Instead, they use a set of VMware video, network, and storage drivers.  These VMware drivers are the same no matter what kind of video card, network card or storage adapter ESX is hooked up to.

This enables sysadmins to shut a virtual server down, copy it to another host server, and start it up without going through a messy driver installation.  It just boots right up as if nothing’s changed.  Some restrictions apply: some older virtualization platforms and some older servers may still install tweaked drivers, like if you move from an AMD to an Intel server or vice versa.  Newer families of processors and newer versions of virtualization software do a better job of hiding these differences from virtual guests.

When sysadmins don’t have to hassle with hardware drivers and compatibility, it makes troubleshooting and maintenance easier.  The more servers in the shop (especially servers of different brands), the easier this gets.

In addition, this makes hardware changes easier.  When servers get old, their annual maintenance fees from the manufacturer increase.  Eventually, it becomes more cost-effective to buy a new server than it does to continue paying maintenance on an old, underpowered server.  Normally this would mean time-intensive reinstalls (or risky backup/restore tricks), but with virtualization, the sysadmin can simply shut the old server down, move the virtual guests onto faster/newer/cheaper hardware, and start them back up again.

Even better, if you’re running virtualization with SAN-based servers, you can move virtual guests around without even shutting them down.

Move Virtual Servers Between Hosts On The Fly

This concept is key to a lot of the benefits I’m going to describe later.  I know you’re not going to believe this, but it really does work.  For VMware ESX users, it’s been working for years.  It requires that the VMware hosts use a SAN, and all servers need to be able to see the same storage so that any virtual server can be started up on any host server.

Here’s how vMotion works in a nutshell:

When it’s done right with high-speed networking and fast servers, the handoff can be completely transparent to end users.

If you haven’t seen vMotion in action, again, I know you’re not going to believe me, but trust me that it works.  I vMotioned servers all the time from one host to another and nobody had a clue.  Well, granted, some of my users were clueless anyway, but that’s another story.

This ability to slide virtual servers around to different hardware at any time, in real time, without taking the virtual server down, opens up a world of benefits.

Do Routine Maintenance Tasks During The Weekday

Even though virtualization removes problematic hardware drivers from the guest OS, there’s still hardware maintenance to be done.  The sysadmin still has to update firmware, update the bios, fix broken hardware, and move hardware around in the datacenter.  The difference is that with virtualization, the sysadmin can do these tasks on Tuesday at 10am instead of Saturday at 10pm.  He can simply evacuate all of the virtual guests off a server in real time, then take his time doing the necessary maintenance work during the day while he’s chock full of coffee.

I gotta confess: as a DBA, I’m jealous of this capability.  Sure, in theory, SQL Server 2005’s database mirroring meant that I could move databases from the production server to a secondary server with a minimum of downtime, but it’s still very noticeable to connected applications.  The connection drops, transactions fail, and my phone rings.  I long for the day when I can move databases around the datacenter undetected.  Until then, I’ll be coming in to work on Saturday nights.

Just in case you’ve been busy reading SQL Server Magazine and ignoring Fortune, we’re having a little problem with the economy right now.  There isn’t one.  (By the way, you might want to check the rest of your mail too, because Bernie Madoff has some bad news about your account.)

Utilization isn’t a metric DBAs normally deal with, but for sysadmins, it means the percentage of horsepower we’re actually using on our servers.  To see an oversimplified version, go into Task Manager on your desktop and look at your CPU utilization rates.  It’s probably low, and it’s probably low on your SQL Server as well.  If you’re averaging 10%, stop and think for a minute about what it might be like to use 1/10th the number of servers and still have enough power to get the job done.

Granted, there’s issues with peaks and valleys, and we have to make sure all servers don’t need full power at the same time.  But if we pooled enough resources together, we could still easily cut the amount of hardware in half and still be way overpowered.

Virtualization enables sysadmins to do this because they can run more virtual guests per physical host.  It’s not uncommon to see 8-15 virtual servers running on a single $10,000 blade server.  More servers in less space, using less power, requiring less cooling and less networking gear – it’s a pretty compelling story to companies looking to cut costs. Back when I worked for Southern Wine, I wrote an HP c-Class Blade Chassis review, and you might find that interesting.

Would you rather have ’em cut hardware costs, or cut people costs?

When servers share resources in groups, it’s easier to reallocate hardware and plan for growth.  When I managed our VMware farm, I had enough capacity that I had wiggle room.  If someone needed a testbed server for a few weeks, I could easily spin up a new virtual server for them without stress.  I didn’t have to hunt around for leftover hardware, find space in the datacenter, get it wired up, and so on.  I simply deployed a template server (a simple right-click-and-deploy task with VMware, happened in a matter of minutes) and added it to the domain.  When they were done, I deleted the virtual server.  It’s a great way to win friends and favors.

At budget time, I didn’t have to take a magnifying glass to every single server to figure out exactly how it would grow and how much money I’d need to spend.  I just budgeted a ballpark number for growth, and incrementally added servers to the resource pool over the year.  When my reseller could cut me a great deal, I picked up new blades.  I wasn’t forced to rush purchases at the last minute without negotiating for good prices.

So Why Should You Care About Virtualization?

As a DBA or developer, most of these benefits don’t really matter to you.  You don’t care whether your sysadmins have to work weekends, or whether they have an easier job managing capacity.  I just wanted to explain to you why they’re going to push virtualization, because there are indeed some real benefits for sysadmins.  There’s benefits to you too, but your sysadmin isn’t going to realize those, and isn’t going to sell you on ’em.  In my next post, I’ll explain why you might want to virtualize some of your SQL Servers.

My Best Practices for Virtualizing SQL Server on VMware

I’ve got a 5-hour video training session on how to manage SQL Server in VMware and shared storage. Check it out now!