Ernie’s getting used to the house 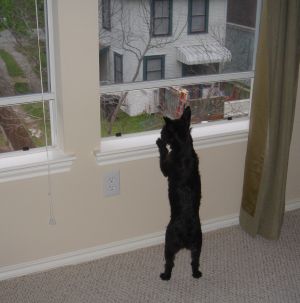 Ernie’s settling into her new home and getting used to the place. Her comfort level is indicated by her newfound confidence in chewing on magazines, which we’ve always kept in a basket in the living room on the floor. That will probably need to change. I’d rather remove the temptation than try to explain to her why magazines are not chew toys.

We’d only bought her a couple of chew toys initially because we weren’t sure what she’d like. She’s grown to like a little alien-looking rubber ball with two feet, about the size of a golf ball, and that’s about the biggest thing she can put in her mouth. We got her a rope toy but the thing’s bigger than her legs, and she certainly isn’t about to go dragging it around the house.

The most interesting thing about her is her apparent obsessive-compulsiveness. I’ll have to get a video of it happening. Sometimes when she gets a treat, she will refuse to touch it. She’ll push it around with her nose, but it’s not even just a straight push: she will rub her nose on the floor, going towards the target object for a few inches, then when her nose gets to it, she will raise her head and tap the object. It’s like she’s sweeping it along, and then touching it once on the top for good luck. She repeats this over and over and over. She’s not gentle about it either – she’s got the motion down pretty good, and I half-expect her to have a nose full of carpet fibers when she’s done.

I gave her a heartworm chewable yesterday and she was in the OCD mode. This morning, I found it in her bed in my home office. I’m not sure how she got it up two flights of stairs – she obviously used her mouth, but if she did that, why not just eat the silly thing? It’s gone again now, and I’m not sure where she put it.

She does the same thing with Beggin’ Strips, those bacon-like treats. She won’t eat them in front of anyone, but instead she carries them around. Either she’s eating them in privacy, or I’m going to find a stockpile of bacon strips one afternoon piled away in a corner somewhere.