Ernie has her first bath at home 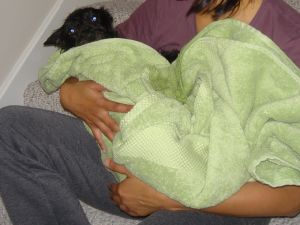 Been a long couple of weeks. Ernie’s doing well, but battling a touch of diarrhea. Okay, more than a touch – more like she got pounded with a diarrhea stick, but you get the idea. For three days I’ve been following her around the house with a spray can of Woolite Heavy Traffic carpet cleaner. I’m thankful we got the berber, but even berber carpet can’t disguise the mess we’ve got here. Time to call in the heavy guns – an actual carpet cleaner.

I just finished a home network setup for a great guy who found me via my HAL-PC articles (and no, I’m not flattering him, because he doesn’t read my blog anyway, hahaha.) He wanted to grow his home network to run a couple of machines dedicated to SETI@HOME, a project designed to search for extraterrestrials. I used to run that software several years ago, but I abandoned it when I started using laptops as my main machines instead of desktops. The software’s come a long way: now there’s programs like BoincView that let you manage a lot of SETI processing machines from your desktop. You can track how many work units they’ve completed, see which ones are faster than others, and make sure all of them are doing what you want them to do.

His network is now made up of two older machines (Win98), two identical new Dells (Windows XP), and two identical Shuttle small-form-factor PC’s we got from Directron, my favorite online vendor. The experience of integrating them together into the network, getting them all using SETI, and supporting them makes me even more convinced that Dell is the only way to go for home computers. Out of the two identical Shuttles, one of them had bad memory when we first installed it. Thank goodness we’d bought two of them, so it was relatively easy to swap parts back and forth until we came to the conclusion that the memory was the culprit. Directron exchanged the memory, but now we’re having problems with one of the Shuttles randomly shutting itself down. Ouch.

The Dells, on the other hand, went in perfectly and performed flawlessly. They cost more than the Shuttle setups, but they came with a lot more hardware, and they’re worth it just for the testing alone. I think next time, even for SETI processing, I’d be more likely to recomment a pair of identical Dell small-form-factor boxes than a homebuilt pair of boxes. Even if you sacrifice some of the performance, it’s worth it for the reliability.

Work’s going well, although I’m about to get one of those promotions that means more responsibility without any more pay. I’m probably going on call, which means I’ll be online for instant messaging a lot more, and probably updating this blog more, heh.

I rediscovered one of my old favorite games, Grand Theft Auto: Vice City. I’m not much on playing the latest and greatest games because they usually require so much more graphics horsepower than my work machine has. Playing games two or three years old, though, is a great sweet spot. My P4 2.6ghz with 1gb ram and an ATI Radeon 7000 plays GTA:VC quite well, and my newly installed speakers in the home office make the game more enjoyable.

I’ve started making DVDs using my Tivo, with the new Tivo-To-Go feature. I gotta say that unless you’re a geek, the process is more of a pain in the rear than it needs to be. You have to:

Last night, I burned a DVD with five episodes of Dwell, a great TV show made by the same folks as Dwell Magazine, covering affordable modern architecture and design. I’ve got a couple of friends in the neighborhood who I’ve introduced to the magazine, and since they don’t have DirecTV, I wanted to show them what the show was like. Burning just that one DVD, all in all, took the entire day. Granted, I wasn’t involved with the process for that entire day, maybe an hour of it total, but that’s still way more work than I’d like. For that reason, I’d guess the networks don’t have to worry too much about people pirating TV shows over the internet or passing around DVDs to their friends. It’s just not worth the hassle.

Previous Post
Ernie’s getting used to the house
Next Post
It’s a bomb! No, wait, it’s THE bomb