Consulting Lines: “What happens if that doesn’t work?”

Companies don’t bring me in when things are going great and everything’s working flawlessly, oh no.  As a consultant, I’ve seen lot of ways that things can fail.  If a tree falls in a forest and there’s no one around to see it, the owner’s probably going to call a consultant afterward to find out what the noise sounded like.  I’ve seen a lot of fallen trees, and most of the time I get asked the same question: “How could this tree have fallen?  We did everything just the way we were supposed to do!”

While I can’t always figure out what the culprit was, I’m usually involved in helping to prop the tree back up.  In the process, a lot of people are going to be involved, because there’s usually a big business built around that tree.  The same people who were in charge of keeping the tree propped up – and failed – are now responsible to get it back up again, and I can’t rely on them knowing how to do their job.  In the heat of the moment, I can’t ask them to prove their capabilities to me, but in this week’s Consulting Lines series, I’ll show you how to ask one single question that will tell you everything you need to know about their experience and their grace under pressure.

The Situation: We’re Dead in the Water

Kaylee: “It won’t start because the catalyzer on the port compression coil blew.”

Me: “Oooo, that’s bad.  Do we have a spare port compression coil that we can pull a catalyzer from?”

Kaylee: “No, but I have an extra starboard one, and I might be able to wire it backwards to make it work.”

Me: “What happens if that doesn’t work?”

This line works whether there’s a manager in the room or not.  If a manager is present, we’ve framed the discussion in a way that isn’t putting the worker at fault if the plan doesn’t work.  Just the opposite – we’re giving them room to vent about all the things that might break, thereby letting management make a more informed decision about whether to take this course of action.

Personally, I love hearing this line from project managers because it’s my chance to shine.  It’s my chance to show management that I’ve got the experience under pressure that the company wants.  I can rattle off lots of ways my plans might fail, and all the ways I’m going to try to work around them or detect them before they hit. 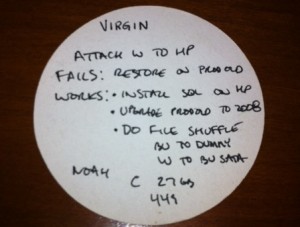 If the other person is calm, collected, and experienced, they won’t take it personally.  They’ll know sometimes things fail when we expect them to succeed, even when we know what we’re doing, and they’ll just answer the question.

Kaylee: “Well, if I miswire it, there’s a chance it’ll blow the other compression coil too.  I should probably have that unplugged when I test my homemade one.  And if that fails, I – ”

Brent: “Hold on a second – let me capture this in writing so I can talk to the pointy-headed bosses while you get the real work done.  Ah, yes, this drink coaster will work.*  Alright, keep talking….”

* – Yes, I’ve actually documented an urgent outage on drink coasters.  The drink coaster pictured here was just one of several that we used during a recent outage of a 10TB data warehouse (who shall remain nameless).  We had several parallel tracks of action, and I documented what we’d do if each one of them failed.  I’m rather proud to notice that I even put the failure actions above the working actions!

If they’re freaked out and beyond their comfort level, they’ll start lashing out.  They’ll insist that things have to work even when they’re doing something they’ve never tried before.  No matter what their reaction is, if it’s not calm, cool, and collected, your first job – before tackling tech tasks – is to address the panic level.

The most common response line I hear is:

Me: “No, we need it to work, but that doesn’t mean it will work.  Before we touch it, let’s spend 30 seconds doing a brain dump about all the ways it could fail.  I’ll write, you talk.”

If they can’t come up with at least one way that their plan could fail, they don’t understand the plan well enough to execute it.  Everything has a risk, and I only want people performing actions when they understand the risks they’re taking.  They might be too freaked out to see the risks, and simply calming them down with a distraction for 30 seconds can do the trick.  If they continue to ratchet up the pressure by insisting on immediate action without comprehending consequences, it’s beyond us geeks – time to get the people professionals involved, meaning the managers.  Managers are better at directing this kind of conversation than we are.