But wait, this is different: it’s not their fault.  They’re suing Promise Technology, makers of popular storage gear, for selling them bogus equipment.  Bogus equipment?  You mean, like hard drives that fail?  That’s horrible!  Who could expect something like that?  Who could know about the dangers that lurk around every corner? 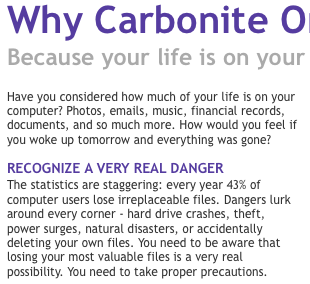 The Statistics are Staggering Alright

Carbonite’s web site warns, “You need to be aware that losing your most valuable files is a very real possibility.  You need to take proper precautions.”

Who knew they were referring to their own services?

Don’t point and laugh and say it could never happen to you because you do your own backups in-house, because I’ve seen too many backup strategies fail for too many reasons.  For the love of your own job, never mind your company’s revenue stream, take some time this week to:

Brent Ozarhttps://www.brentozar.com
I make Microsoft SQL Server go faster. I love teaching, travel, and laughing. I live in California with my wife Erika.
Previous Post
Getting Help With A Slow Query
Next Post
Dev, Test and Production SQL Server Environments