Jason Massie and I had a steel cage blogmatch about whether to configure a SAN with shared or dedicated drives, and we both passed out for exhaustion.

This debate is starting up again but with a slightly different spin: virtualization.  In an environment with Microsoft Hyper-V or VMware ESX, more than one SQL Server may have its virtual drives on the same physical hard drives.

If we have two SQL Servers, are we better off keeping their virtual hard drives on separate physical hard drives, or using one larger pool of hard drives shared between the two?  Microsoft’s technical article “Running SQL Server 2008 in a Hyper-V Environment: Best Practices and Performance Considerations” attempts to answer that burning question with Figure 16 on page 24: 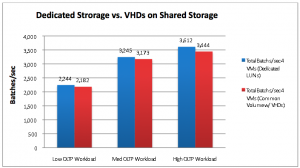 However, they’re only 3.5% faster on average.  Management of the shared disk approach is much more than 3.5% easier, so I’d have to vote for the shared drive approach, much to Jason Massie’s glee.

Plus, keep in mind that your servers probably won’t all be under full load at all times.  During periods where only one server is under heavy load, that server should achieve higher performance throughput since they’ll have more idle spindles available to them.