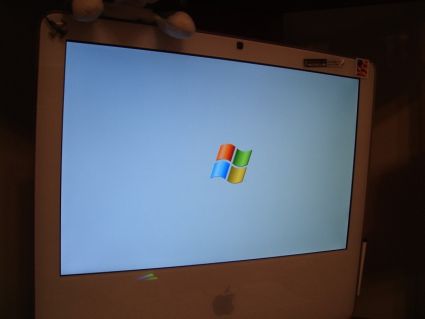 Apple’s newest machines use Intel processors, just like regular PC’s from Dell and HP. That meant in theory, we could have Apples that run both Apple software and Windows software. In reality, it took some time and about $13k of bounty money to make the whole thing actually happen. After the instructions are posted, individuals should be able to install Windows on top of Apple machines.

This is exciting for me because I have to use Windows stuff for work, but I’ve always wanted to play around with Mac OSX, and I really like the industrial design of Apple hardware.

It’s still not ready for mass consumption, because it’ll probably take a while for things like device drivers to work. What good is running Windows on an Apple, for example, if you can’t connect to the network? Geeks will hack away to get that stuff into place, and then a lot of us – myself included – will be plunking down $$$ for Apples. In fact, it’s great timing for me personally, because I probably won’t get a laptop in my new job, but I want a laptop for home. Macbook Pro, here I come…