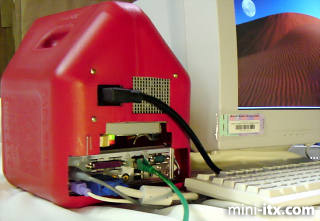 The database server is undergoing maintenance at work, so I’ve got a few minutes. (And no, the machine pictured here isn’t the server.) I surfed over to Tom’s Hardware, one of my favorite review sites, and they’ve got an excellent evaluation of the new mini-ITX motherboards from Via. Mini-ITX is a relatively new compact form factor for motherboards that allows you to build a computer in much smaller packages. The motherboard itself is about 6.5″ by 6.5″, so you could pop one of these in a glovebox relatively easily. Plus, these Via models run cooler than conventional computers, and require less power, so they’re perfect for in-car applications where you don’t want fans or huge power inverters.

A great source of information for this sort of thing is Mini-ITX.com, a UK site that shows plenty of great examples of building Mini-ITX motherboards into cool pieces of equipment like a log cabin or a gas can. Why? Because you can.

I’ve been interested in Mini-ITX since I started playing around with an in-car computer, and I gotta confess, I wish my Volvo C70 had the Dolby Digital surround sound option. (Some of the C70’s have a fifth speaker in the center of the dash.) That would allow the uber-geek experience of wiring the Via’s Dolby Digital AC3 5.1 surround up to the Volvo’s speakers. The Volvo deck doesn’t have AC3 digital inputs, obviously, so it’d be an expensive proposition, finding a car-based AC3 amplifier.

Theoretically, I could buy a C70 surround-equipped dashboard top from a salvage shop or something, but the thought of tearing up my new Volvo isn’t pleasant. Maybe a couple of years from now.

Database server is back online. Back to work.