How to Ask Your Boss for Training Money

I hear that all the time from people who want to go to a conference or a training class.  They’re terrified to walk into The Boss’s office because The Boss only says one word: “No.”  Here’s some easy ways to start the conversation, handle objections, and seal the deal.

“You know that project we’ve got coming up this year?” If you’re planning a project around virtualization, SAN storage, performance tuning, or version upgrade, you can get trained before the project starts.  Bosses understand that the training needs to happen first, and you’ve got a killer line here: “If I get trained first, I bet I can save us from spending too much on the wrong storage or doing something that makes the project fail.  An ounce of prevention is worth a pound of cure.”

“I’m tired of relying on consultants who don’t know what they’re doing.” If your company has been burned lately by consultants who are fumbling their way through your systems, now’s your chance to offer yourself up as an alternative.  With seriously advanced training, you’ll be able to do seriously advanced tasks.  All of the training I do is focused on giving you things you can take back to the office and make your systems faster and more reliable.  At the very least, you’ll be able to call the consultants’ bluff when they’re faking it.  Your boss is probably sick of spending money on people they don’t trust, but they DO trust you.  Investing in you is a safer bet than spending more on strangers.

“I know we can’t get raises this year, but…” Economic realities mean some companies are still in a wage freeze.  If you’re good, your boss probably wants to keep you around.  He can’t go offering training to everyone, but if you’re one of The Good Guys and you show initiative to ask, he’ll bend the rules for you.  Don’t ask if you’ve got a training budget, because that’s likely to make him say no, and you want to get to yes.  Instead, say something like, “I know we can’t get raises this year, but you know what’d make me just as happy?  Getting training.”

How to Handle Objections Gracefully

Here’s the most common objections I’ve heard from managers:

“I can’t send you because conferences are boondoggles.” Managers have probably been to conferences themselves, and they know that conferences involve just as much partying as they do learning – if not more.  Even worse, THEIR managers believe conferences are boondoggles too, because once you get to the upper management level, “conferences” involve a whole lot of golf and hanging out with buddies.  Your manager may not want to be seen as sending their own employees to conferences.  It’s tough to fight this image (especially when the web is full of conference party pictures) – so take a different tack.  The easy response is, “That’s fair – how about I go to training instead?  Brent Ozar Unlimited offers 4-day training classes, no partying involved.”

“Why can’t you just go to training locally?” Training companies like New Horizons have offices in most major cities and they periodically offer SQL Server classes.  Yes, I’m actually linking to one of our competitors – because people who have attended those types of classes will usually tell you there’s no competition at all.  One easy response is, “I want to learn from someone who’s actually doing this work, not somebody who’s reading from a script.  Brent Ozar Unlimited®’s people win awards from their attendees, like Best of PASS Summit and Top Ten of TechEd.”

“I can’t have you unavailable for a week.” I remember what it’s like to be not just the DBA, but also the developer, the sysadmin, and the coffeemaker.  My favorite response to this is, “I’ll take my laptop and I can pair it with my phone to get internet access.  If there’s an emergency, I’ll leave the class.  I’d rather get some training than no training, and I’ll log in every night to do as much preventative maintenance as I can after class.”

“What’s the ROI?” Managers love Return On Investment – a calculation that shows the money they spend on something pays for itself.  Yes, training really does have an ROI, and here’s how to calculate it.  Tell your manager, “We’ll spend about $5k on the training including hotel and airfare, and here’s what we get in return:”

How to Seal the Deal

“I’ll bring back the material I learned and re-present the highlights to the team.” At training events, presenters don’t always hand out their PowerPoint files, but they do give handouts with the slide content printed out.  This material is usually copyrighted, and you should never re-present this material to the public, but re-presenting it to your own team is a way to bring value back to the rest of the staff who didn’t get to attend.  You can filter the entire week’s worth of training down to just an hour or two of material that is especially relevant to your own team, helping them fix problems that are happening in your environment right now.

“I can ask questions about our environment and get the very best free help.” I’ve gotta be honest – hiring a good consultant for a few hours is really expensive.  During training sessions, I’ve fielded questions from audience members about specific issues they’re running into in their environment.  After the training, I’ve even sat with students as they VPN’d into their company and pointed out problematic servers, thereby troubleshooting with them right then and there.  Not only are we able to give good answers, but we also ask the entire class.  Our audience has decades of SQL Server experience, and sometimes the best answer is sitting next to you.

I still remember the first time I got up the courage to ask my boss for training money.  I was blown away that he said yes, and I kicked myself for not asking sooner.  Don’t sit around waiting for someone else to offer you training money – it just won’t happen.  Take control of your career and use these techniques to pop the big question.  If your boss still says no, post the reason why here in the comments, and as a group, we’ll figure out how to help you get to yes!

Update: it worked! @ShadyRudy read this post and was inspired to ask his boss.  I’ll be meeting him at a class in March! 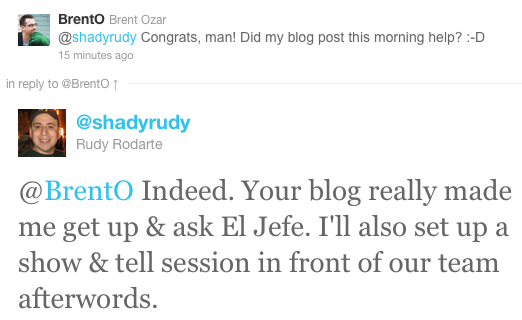