You, dear reader, probably don’t work in the marketing department.  The vast majority of my readers are information technology professionals, and the rest are my family.  (Hi, Mom!)

Today, you can’t get a job like mine without knowing how whuffie works.

In the not-too-distant future, you may not even be able to get a job like yours, or at least the job you want next, without knowing how whuffie works. 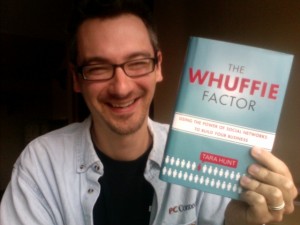 I first learned about whuffie a few years ago when I started playing with Flock, a web browser with social networking built in.  The people behind Flock were building a really cool product, and they were building it in an open way that involved their user community.  I was dumbfounded by this ability to interact directly with the developers.  I’ve never been one to file software bug reports because as a developer, I felt that most bug reports went unanswered.  Companies didn’t have the resources to fix bugs – they just wanted to push products.  I saw the way the Flock guys got so involved with their users, though, so I took the plunge and filed my first bug report.

I don’t remember whether or not they fixed the bug, but I remember that they interacted with me in a positive way, which encouraged me to file more bug reports.  I wasn’t building a mental image of a buggy browser, though – I was building a mental image of guys who genuinely cared about what they were doing and cared about their users.  This was completely different than any other online software experience that I’d had, and I found myself getting more and more involved.  I had to find out why these folks were acting this way, because it wasn’t a natural frame of mind for a software developer to react positively to bug reports.

Among the many interesting people working in proximity to the Flock phenomenon, I ran across Tara Hunt’s blog at HorsePigCow.com.  She blogged about marketing and made me look at it in new ways that I’d never considered.  Marketing wasn’t just a bunch of sexist guys designing magazine ads of barely-clothed women holding their product in provocative positions.  Marketing meant understanding that places like forums, web sites and Twitter are, as The Whuffie Factor explains:

“…a simple but powerful online community where thousands of buying decisions are made every single day.”

This message isn’t just for companies: it’s for employees.  Every time you interact with another member of a community, whether you’re doing something good or not so good, you’re affecting your social capital.   Social networking transactions don’t happen in a vacuum, either – bystanders notice your actions, and even if they’re not involved with what you’re doing, they make buying decisions based on your actions.

“Who cares,” you ask, “if I’m not selling a product?”  Even if you’re not working a street corner, you’re selling yourself.  Future employers, future clients, and future coworkers are taking stock of your every action.

Why Whuffie Matters for Employees Too

I used to be a SQL Server database administrator.  As I got more involved with the Flock community, I realized that I had to be missing something.  There had to be a similar community for SQL Server, and I had to get involved with it.  I found PASS, attended my first conference, and started focusing my spare time on the community.  Tara’s book didn’t exist yet, so I read her blog, watched what the Flock team did, and tried to apply their techniques to my own work.  I made mistakes – and still do – but you have the advantage of this book to help guide you along the way.

The Whuffie Factor demystifies the workings of social capital and marketing, and these explanations work great for IT geeks.  Let’s face it: we suck at networking, and we suck at marketing.  We need all the help we can get.  This book is the help, and we don’t need a marketing background to understand how it applies to us.

The chapter “Become a Part of the Community You Serve” and the book’s repeated message about turning the bullhorn around especially resonate with me, and it illustrates the problems with so many IT communities.  Tara discusses how she worked with a web site to throw away their imaginary user profiles and connect directly with several real users instead using their own product.  They became more and more intertwined with their own customers, and as a result, built better products.  I’ve learned these lessons personally at Quest, and I found myself nodding over and over – and not because I was going to sleep.

Whuffie is Easy to Get, but Much Easier to Lose

Companies don’t run around bragging about that time when they completely borked their online marketing strategy and pissed off thousands of customers.  They bury those stories as deep as they can.  The Whuffie Factor includes some of these cautionary tales, like the times when Wal-Mart tried influencing social networks with ill-advised stunts.

History continues to repeat itself, too.  In chapter 4, “Building Whuffie by Listening to and Integrating Feedback”, Tara tells the story of when Facebook launched feeds and alienated its users.  Facebook has shown time and again that if you don’t follow the lessons in the book, your reputation will be tarnished.  Reading The Whuffie Factor is a lot more effective than making these expensive mistakes in public.

When you do make mistakes in public – everybody does it sooner or later – the chapter “Embrace the Chaos” talks about how to handle it.  Part of me wonders why everybody doesn’t know this stuff innately, but watching some social networkers in action, it’s obvious that they don’t.  Whether you’re a company or an individual IT worker, knowing how to handle your public failures is a valuable lesson that by itself is worth the price of the book.

My favorite quote from the book, and the one that sums up why even employees need to read it, is:

“You can’t eat whuffie, but it’s getting harder to eat without it.”

I know some of my readers already believe in the power of this fancy internet community thing because I interact with them on Twitter, Facebook, and so on.  At the same time, I know a lot of you haven’t bought into it yet because my blog readership dwarfs the Twitter numbers.  If you’re one of the masses who reads blogs but doesn’t do social networking yet, do yourself a favor and get this book.

Buy The Whuffie Factor on Amazon