I’m liveblogging the keynote this morning on here and on my Twitter feed.  Go to this page and refresh it periodically to get the latest news as it happens.  Updates are at the top of the page to make reading easier during liveblogs, and I’ll reverse it tonight for easier reading later.

10:03 – Judging by the reaction from bloggers and Twitterers, they’re genuinely surprised by the Project Gemini stuff.  Hello, welcome to last month.

10:00 – Donald Farmer walks onstage with fairy wings as part of the fairy tale.  He’s showing the 10-million-row demo of Gemini, sorting instantly on a laptop machine.

9:57 – Talking about enabling the SSAS-style experience inside Excel, and why end users don’t want to learn star schemas or dimensional models, they just want to get the job done. Amen – that’s my session today at PASS.  Kilimanjaro runs on a column-based storage (fast fast fast).  BI utility hosted within Sharepoint.

9:52 – Ted replayed the “Once Upon a Time” story he gave at PASS.  I’ll forgive him because it’s so good.  It basically talks about how IT can’t answer end user needs fast enough.  Donald Farmer coming out to demo managed self-service BI, aka Project Gemini, next.

9:50 – He’s bringing developers up to speed on the Azure announcements from PDC.  Will be exposing all of the data services over time, and will be moving forward very rapidly.  The first CTP of SQL Data Services is now available. (Could have sworn this was out at PDC.)

9:47 – DAC demos over, and Kummert’s talking about deploying databases to the cloud.  “You should be able to leverage your knowledge and investments to deploy in the cloud.”  It’s a statement about tools and about capabilities.

9:46 – Applications will get a “friendly name” for a connection string – somewhat like DNS.  That means you can move DACs around without breaking applications.

9:45 – They’re suggesting (but not specifically saying it) that there’s some change management inside the DAC process.  Admins can specify requirements of a DAC of things like SQL Server versions & editions, performance needs, etc.  A data warehouse would have different requirements than a small OLTP app, for example.

9:44 – SSMS can connect to an existing database, reverse engineer it into a DAC Pack and include the schema, plus things outside the database like logins.  Didn’t mention code, of course.

9:42 – Inside SQL Server Management Studio, there’s a new view called the Fabric Explorer that connects to a Fabric Control Point to show a dashboard of your instances.  you can see the utilization, health, trending, and more for each instance.  Helps you decide where to deploy DACs, and see which DACs need to be moved to other parts of the fabric.  There’s a build system in Visual Studio to build the DAC Pack.

9:41 – The DAC is a package of deployment requirements: schema, prereqs, things the application needs from the fabric in order to get deployed.

9:40 – Dan talks about how we manage instance by instance right now, not as an enterprise.  Need the ability to manage our servers in pools: the SQL Server Fabric.

9:39 – Talking about the ability to deploy applications as a package, along with its prerequisites.  The “down payment” will be released as a part of Kilimanjaro.  Welcoming Dan Jones to cover it.

9:37 – Demo over.  Switching to management: discovery, transparency, deployments based on policy, improved utilization in Kilimanjaro.

9:33 – Demo uses SSRS querying the cluster and the nodes go crazy.  Some nodes take longer to complete than others.  Says “It takes a minute for the tubes to warm up.”  HAHAHA, good one.  Nobody here got it though.

9:31 – Showing 7-table star schema.  Fact table has 1 trillion rows, 6 dimension tables, 150tb of data.  Tables are replicated across the nodes.  The dimension tables are copied to all nodes so that joins happen faster. Showing the system monitor with CPU/IO metrics they showed at PDC.  I love this demo visually.

9:30 – Showing a Dell 2950 reference architecture with one active/passive control node and a bunch of 2950 compute nodes, EMC on the back end.  Says they’re also working with HP gear too.

9:16 – Ted brought on Ayad Shommout, lead DBA for CareGroup Healthcare Systems, to talk about their experiences with the SQL 2008 upgrade.  He’s a great customer for that – they have HIPAA needs, which is a good fit for SQL 2008’s features: auditing, encryption, policy-based management, etc.

9:12 – Talking about the new features of SQL 2008 based on the four pillars – enterprise platform, beyond relationship, dynamic development and pervasive insight.  This slide was cool when I first saw it in, when was it high school, but now… 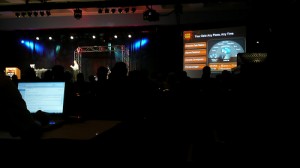 9:06 – If you interact with Microsoft folks in the official MS shirts, they’ll give you SQL Server Bucks.  You can redeem those at the end of the conference for a free car.  Okay, well, for something maybe.

9:03 – Video playing about how the PASS community helps build the product.  Donald Farmer talking about Gemini as the future of business intelligence.  I’m psyched, and Ted Kummert just walked onstage.  Walked?  What, no Vespa?

9:01 – Wayne introducing Ted Kummert, Corporate VP of Data and Storage Platform Division from Microsoft.  Forgives him for working for Apple.  (Between that and Wayne’s jokes about tweets, I think he needs to get some schooling on social media, but I’ll forgive that!) 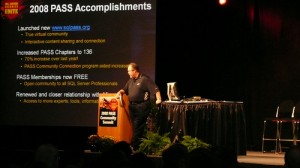 8:50 – Wayne thanking the PASS Board and past president Kevin Kline for their tireless efforts. I gotta track down Christoph Stoltz and thank him for being such a kick-ass host when I spoke in Germany.

8:48 – Jeremiah Peschka is also liveblogging the keynote. (I got your name right this time, man.)

8:40 – Wayne’s talking about the PASS Board’s mission to facilitate member networking, passing knowledge on from one DBA to another.  Talking about how some conferences are “zombie conferences” where you go from one session to the next, go back to your hotel room alone and be quiet.  PASS is not that conference.

8:37 AM – Born to be Wild music video playing to warm up the crowd.  Wayne Snyder rides onstage on a motorcyle and takes off a leather jacket.