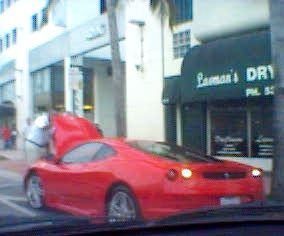 I get a kick out of seeing quarter-million-dollar cars put in completely mundane positions. I’m not talking about things like Wrecked Exotics, a site that features expensive car accidents, but more like day-to-day tasks like a Rolls Royce at a parking meter.

Sitting at a traffic light today, watching a man load his dry cleaning into the hood of his Ferrari (remember, their engines are generally in the back of the car), I realized that I’m probably in the prime market area for Segways. There’s a ton of money around here, the money is spent on crazy items, everything is almost (but not quite) within walking distance, the city’s laid out for walkers, and the climate is great outside most of the time.

But I’ve never seen a person riding a Segway in South Beach. Not once. Well, there were a couple of women riding Segways and handing out music CD’s for Yahoo, but that doesn’t count because it was their job. I’m talking about people who actually spent their own money on a Segway and actually use it to go places.

I think if Segway can’t succeed here – or even get a single buyer – then they’ve gotta be doomed. People buy the most ridiculously expensive stuff here and flaunt it. I just got back from walking the dog, and I saw half a dozen Hummer H1’s and H2’s all blinged out with huge rims, lots of chrome, big stereos, etc all coming back from the clubs. So where are the Segways?