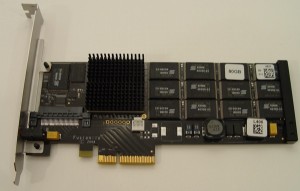 Fastest Storage in the World?

I don’t talk about hardware much here, but an SSD review hit Engadget this morning and made me take notice.  Fusion-io gave their new 80gb ioDrive to TweakTown for a review, and –

Wait, hang on.  Don’t close the browser yet.  I know, everything about this post reeks of some tiny manufacturer with borked products and a one-page pamphlet instruction manual written in Engrish.  TweakTown is not exactly the world’s most trusted source for enterprise-class database hardware, but bear with me for a minute.  And for the record, Fusion-io is based in Utah.

So anyway, here’s the stats that TweakTown (cough) is reporting:

The Drawback: No RAID

TweakTown’s review was nothing short of glowing, but as a SQL Server DBA, I immediately had an issue with it.  Notice that this isn’t a SATA drive – it’s an internal PCI-Express card.  How do I protect against failure?  Sooner or later it’s going to fail, because everything fails, and I want some level of redundancy.  I can plug two of them into a server, but then I have two drives, and I have to implement software RAID.  Ugh.  Let’s say I’m okay with that (which I’m not) and I implement it – what kind of speed hit do I take?

Where the Fusion-IO Drive Makes Sense

If I had a SQL Server with excessively high TempDB load, to the point where TempDB was the biggest bottleneck in the system, I’d buy one of these and put TempDB on it.  After all, if TempDB fails, I haven’t really lost much.  Heck, my SAN admins would probably buy it for me to get my TempDB off the SAN if the load was that bad.

If I had a SQL Server in a colo datacenter, and I needed more storage speed, this would be a fast way to get it without paying more monthly rental fees for space for a SAN.  SANs suck up a lot of rack space, and a couple of these in each database server (although probably the larger size ioDrives) would probably cost less than two years of colo space rental.  Your mileage may vary.

And if I had a million dollars, as the Barenaked Ladies so elegantly said, I’d buy one for my girlfriend.