Two of my favorite members and best speakers in the SQL Server community have made big changes – they’re refocusing their careers and their community work outside of SQL Server.  Is it the beginning of a trend?  What’s going on in the NoSQL and cloud database world that’s so attractive to these guys?  I interviewed them to find out.

Me, Buck Woody, and the coolest quilt ever.

Buck Woody (Blog – @BuckWoody) has worked for Microsoft since 2006, and until recently, he was our Inside Man – a fighter for the SQL Server data professional.  He switched roles over to the Azure team a couple of months ago.

Jeremiah Peschka (Blog – @Peschkaj) joined Quest Software this year as a sort of technology evangelist, working with NoSQL and cloud databases.  Prior to that, he’s worked with SQL Server as a developer, database administrator, and consultant.  He just resigned from the PASS Board of Directors to spend more time working with the NoSQL communities.

Brent: Question 1. WHAT, SQL SERVER ISN’T GOOD ENOUGH FOR YOU?  Okay, well, if I’m honest, it isn’t good enough for me either, because there’s always more stuff I wish it did.  But what is it about these other database movements that excited you enough to focus more on those?  Give me your elevator pitch.

Buck: No – it isn’t good enough :). But then, nothing ever is when you’re a curious person – and I’m one of those! I feel that utility-based computing is inevitable, and it’s all just data anyway – so Azure was a slam-dunk for me, a natural progression in my career. The tougher part was actually getting the position, since lots of really smart folks at Microsoft wanted the job. But I have those pictures….

Jeremiah: I’m excited because these new databases focus on one thing and doing it well. They each scratch a particular itch. SQL Server is a great general purpose database, but there are some things it doesn’t do very well – batch processing, massive parallelism, and scale out.   Many of these databases build on the skills that developers already have (object-oriented programming) to create complex solutions for ETL, analytics, and distributed storage – they’re good frameworks for complex tasks.

Brent: You’ve both been transitioning away from SQL Server for a few months.  What’s the state of these new database communities?  What are they like compared to the SQL Server community today?

Buck: Vague, undefined, and unordered. No, wait, that’s the cloud! So of course the audience mimics the product structure. Since Azure is essentially an online operating system that you write almost any code you want against, the users have a huge – I mean absolutely huge – range of skills, ages, interests and so on. So the community isn’t anywhere near as defined as SQL Server is. Not only that, it’s a new product, so the community hasn’t had time to define itself. I think over time we’ll get enough vertical interest groups that communities will form. It will just take time. 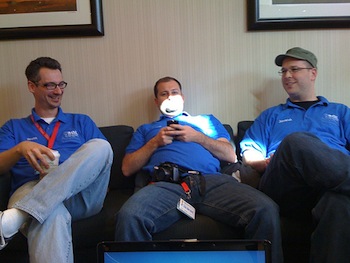 Me, Aaron Nelson, and Jeremiah Peschka at SQLSaturday Chicago

Jeremiah: The emerging database communities are very young right now. It’s difficult to figure out which databases will stick around for a while, but the communities are vibrant, changing, and open to new ideas. There’s a lot of energy, enthusiasm, and passion. People want to share what they know.

Brent: What can the SQL Server community learn from the NoSQL and cloud communities?

Jeremiah: The biggest thing that I’ve had to re-learn is that it’s important to look at every problem fresh and evaluate all of the options available before determining what to use. Sometimes it only needs to be a cursory glance, but other times it’s worth really examining what’s going to be happening and figuring out the best solution for the problem.

Buck: Agility and adoption, and focus on solving a problem, regardless of the technology. I don’t see nearly the stratification of the developers as data professionals, and the developers seem very willing to try anything new, as long as it solves their problem. They are also ready to move to the latest technologies.

Brent: How far away are we from the time when European or financial customers can adopt these new technologies?

Jeremiah: A number of European and financial customers are already using a variety of NoSQL databases. Booz Allen Hamilton are providing consulting services around Hadoop and Bank of America is also using Hadoop. a number of companies are using other NoSQL databases – ComCast are using Riak, and the New York Times and Intuit are using MongoDB. There are a bunch of NoSQL conferences happening in Europe – NoSQL:EU and Business Cloud 9.  I think that some aspects of cloud computing are further away in Europe due to EU regulations, but I could be wrong. I’m not as familiar with cloud databases as I am with the NoSQL space.

Buck: They are doing it now. In fact, after I type this I’m off to meet with a financial firm on their latest Azure application. It’s moving faster than most people realize, to Azure, Google, and Amazon.

Brent: If I wanted to keep an eye on the databases you’re working with, what are the top few blogs I should check out?

Jeremiah: I’d keep your eye on the NoSQLPedia blog aggregator, for starters. We’re adding more people on a weekly basis. Outside of that site specifically, things are still pretty fragmented at the moment.   In general, I watch Lars George for Hadoop and HBase news, the Basho blog for Riak, MongoTips and Snail in a Turtleneck for MongoDB news, Planet CouchDB for CouchDB, antirez.com for Redis, and http://facility9.com (of course) for my take on the entire thing.

Buck: I tend to like http://blogs.msdn.com/buckwoody :), but anything Wayne Walter Berry writes is tres-awesome.

Brent: If – okay, when – I talk to you again in a year about you’re doing, what do you hope to have pulled off?

Buck: A significant growth in the “Azure Marketplace” – a site where you can sell your Azure “Apps” to other devs or even end-users. I’d like to see that thing eventually become the iTunes of the cloud.

Jeremiah: I want to see people actively using hybrid database solutions in their production environments. If I hear about someone using SQL Server for their RDBMS, Hadoop for batch processing, Hive for analytics, and Riak for caching and data distribution, I’ll be a very happy guy.