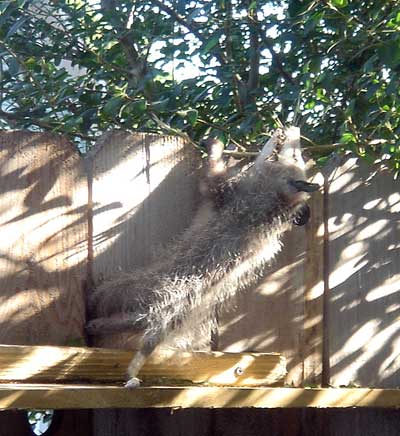 When I went downstairs this morning to make my second pot of coffee, I opened the kitchen blinds and saw a little creature in distress. This fella got his legs caught in the boards of my back fence overnight, probably while walking along the top, and was stuck.

He was still alive, thank goodness, and I was heartbroken at the thought of him out there. He wasn’t struggling – he was quite mellow – but I had to get out there nonetheless. I put on a thick jacket and a pair of gardening gloves, went out, and talked to him for a while to make sure he wasn’t going to jump me like a crack fiend carjacker. He seemed content to just nibble on the branch where he was stuck. I gently took hold of his giant feet (stuck on the other side of the fence) and held his rear end with my other hand, and unbelievably, he didn’t try to bite me. He wasn’t stuck in too tightly, so I was able to pick him up and out, and set him back upright. He thanked me, promised to write, and staggered along the top of the fence, probably headed for his momma.

I’d say he was adorable if he wasn’t so dang ugly. He was hideous. But there’s no way I could live with myself knowing an animal was stranded on my back porch. I wish I would have noticed him before Erika woke up, because she was genuinely and absolutely panicking at the sight of me picking up such a (relatively) big animal. She had visions of him taking a big bite out of my arm, and well, so did I, but ya gotta do what ya gotta do.

I had no clue what he was at the time, but I’ve since figured out he was a possum. Amazing. I’ve actually held a possum.