I’m so proud. My baby’s all grown up now.  When I started BrentOzar.com more than ten years ago, I never would have dreamed it’d turn into a consulting company, but here we are.  Getting from Point A to Point B is hard as hell, though, so today I’ll give you a peek behind the scenes at some of the stuff we’ve been up to lately.

I love to dress up – my blog posts, that is.  Pictures are good, but for years, I’ve wanted to do pull quotes: standalone sentences that pop out visually from the rest of the text.  They grab a reader’s attention, show off your fancy punchlines, and save them from the tedious monotony of your boring writing.  Some posts just don’t lend themselves well to pictures, and sometimes you’re just really proud of a particular line.  (No, I’m not proud of most of the lines I write here.  In fact, I’m going to go cower in shame right now.)

There’s a really good WordPress plugin for pull quotes, but it doesn’t work for people who subscribe to the blog via RSS or email.  We’ve got thousands of RSS and email subscribers, so that wasn’t good enough. 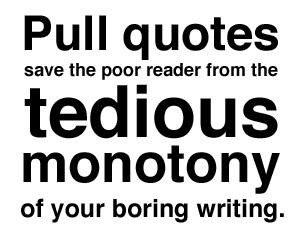 Out of nowhere, Kendra Little (b|t) emailed a picture of a magazine article to discuss the typography layout, and it hit me – I could use pictures of text instead.  Hard-core web designers will point out that using pictures of text is very bad form: the text isn’t searchable, doesn’t work with screen readers, and kills kittens.  I’m not really a cat guy, and the text doesn’t really need to be searchable, and the results are just so damn gorgeous.

To create image-based pull quotes, fire up your picture editor of choice (Photoshop, Gimp, or MS Paint for the Access guys) and lay out your text.  Save it as a PNG (gets you image compression with minimal loss) and upload it just like any other picture you’d use in your blog editor.  Presto, beautiful pull quotes.

With this method, you can use any font and layout without the hassles of CSS and web-friendly fonts.

Refining Past Posts and Combining Series

Through a lot of careful analysis, I’ve learned that multi-part series posts just don’t work well over time: people randomly stumble upon a single article in the series, but they don’t start at Part 1 and click all the way through the end. I fixed this by combining the posts: I take the Part 1 post, merge the other blog posts into it with copy/paste (yes, I plagiarize my own work) and turn Part 1 into a comprehensive, long post that covers the subject start to finish.

Between combining posts and refining & expanding content as described in my post how to find buried treasure with Google Analytics, I’ve put a lot of work into some of my past stuff. A few examples include:

On some of those pages, I went so far as to embed a contact-us form with Contact Form 7 directly on the page.  This represents another step in the evolution of BrentOzar.com.  In the beginning, I begged people to contact me.  Years later, I ripped out that wording because I was getting overwhelmed with homework questions, and just let people leave comments when they were really struggling.

These days, since we offer consulting services, we’re trying to gracefully offer help where we can.  If somebody has a question we can answer in 5 minutes or less, generally we just do it for free.  If it’s something that would take an hour of dialog, we need to bill for that.  The stuff in between is probably best handled on sites like StackOverflow.com and DBA.StackExchange.com.

We’d tried social media toolbars like Wibiya before, and I just wasn’t impressed.  Web site metrics didn’t improve (although we did get a big rush of Facebook fans) and the toolbar looked spammy.  However, with the launch of Google+ and Facebook Video Chat, we decided to give social media buttons another shot.  We added the Twitter, Facebook, and Google +1 buttons right under the post titles.

Did it work?  I’m not sure yet – this one’s too early to tell right now, but early results from Backtweets look positive.  I’ll keep an eye on the metrics and see if it matters.

When we work with clients, some issues pop up really frequently.  I constantly have to refer people back to certain posts.  Rather than trying to remember some obscure URL or hoping that an outside link service doesn’t go down, I used the WordPress GoCodes plugin to create my own list of useful short links.  This way, when someone wants to learn more about how to do backups, I can just say, “Go to BrentOzar.com/go/backup and I’ve got my best practices and posts on there.”

This set of specialty landing pages is something I’ll be putting more work into over time.  We write a lot about our favorite topics, and we need to group together our best past posts by topic into a single resource page per topic.

BrentOzar.com has four authors now, but we kept getting confused readers complimenting me for a post that someone else wrote.  The sweet WP About Author plugin fixes that elegantly by adding the post’s author profile to the bottom of every blog post:

It even works on the main page of the blog, and you can customize which pages show it.  On a single-author blog, you probably only want it on your single-post pages.  That way, when people arrive at your post via a Google search, they learn a little more about you and might remember you by name later.

The one drawback is that it doesn’t show up in the RSS feeds.  <sigh>  A blogger’s work is never done.

Previous Post
The Difficulty with Deadlocks
Next Post
Land a Dream DBA or Developer Job: Seven Questions to Ask