I Think You’re Exceptional. No, Really.

A funny thing happened on my way to becoming a judge in the 2011 Exceptional DBA Awards.  But to get there, I gotta tell you a story about my dark past.

I used to be a developer.  No, wait, it gets worse: I coded web pages in Classic ASP, aka VBscript.  My idea of reusable code was stuff that I could copy/paste into multiple web pages.  I didn’t have a QA team – our idea of testing was to run it a few times on our own machines, and then keep an eye on it after we deployed it to production.  To me, the word exception will always remind me of exception handling, one of the many things I didn’t do well as a developer.

The bad news was that my code sucked, but the good news was that I knew it.  I wasn’t destined to be a developer, and I started transitioning into database administration instead.  I loved SQL Server, hardware, and performance tuning, so I began interviewing for jobs that would let me focus on that.

Along the way, I had a job interview that didn’t go well.  It was a company with offices in multiple states, and part of the interview involved a phone discussion with the head DBA in another state.  The DBA asked me, “If you wanted to monitor for exceptions and problems on your SQL Servers, how would you do it?”

I answered immediately without so much as a thought: “I’d buy an alerting package from a vendor.”

The DBA drilled down deeper, asking me how I’d build an alerting system with things like DMVs and SSIS, but I refused to budge.  I explained that my code simply sucked, and that it would take me way longer to build a collection utility – and even when it was done, it’d be garbage.  The DBA asked if I would use any of the freely available scripts at places like SQLServerCentral.com, and I could hear the DBA’s anger and dissatisfaction through the phone at my replies.  I just didn’t want to hassle with rolling my own software.

Needless to say, I didn’t get the job.  However, that experience pushed me harder to hone my skills. In my epic post Rock Stars, Normal People, and You, I documented my grueling struggle to take control of my databases, my career, and my life.  It was a long, hard road, and it all started with one simple thing: 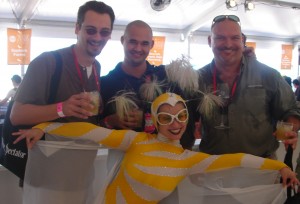 Working in IT for a wine company is hard. Really.

I spent time in the SQL Server community.

I started reading blogs, watching webcasts, and attending presentations.  As I got my confidence up, I realized I could give back too, so I started presenting my own stuff.  The more I gave back, the more addictive it became.

I know you’re exceptional too – because you’re here.

When I go out and talk to people at conferences, SQLSaturdays, and user groups, I talk to people about what blogs they read.  Most of ’em don’t have time to read blogs.  You’re already in the minority just by being here – you’re taking time out of your day to advance your knowledge.  You’re not getting paid to read my blog.  You’re doing this because you love what you do, and you love to learn.  That’s exceptional.  It’s outside the norm.  Sure, I know, you think you’re just one of thousands here in the online community, but it’s easy to forget that simply by being here, you’re already ahead of the curve.  You’re ahead of the tens of thousands of database professionals who never take the time to read blogs, watch webcasts, and attend presentations.

Red Gate just launched their annual Exceptional DBA Awards contest to honor people like you.  Yes, you.  And I want you to go enter.  Stop comparing yourself to the people up on the podium, and start comparing yourself to the people who never even bother to show up to free conferences in their own town.  You’re exceptional.  Stop thinking of it as blowing your own horn, and start thinking of it as being proud of what you do.  I know you love what you do, because you’re here reading this blog.

Trust me – I’m judging the contest.

I’m honored to say that Red Gate invited me to join Brad McGehee, Rodney Landrum, and Steve Jones in judging the 2011 Exceptional DBA Awards. We’re looking for people who don’t just do their jobs, but they go above and beyond – spending time reading blog posts, answering questions online, and giving back to others.

I’m really honored to be a judge because it’s a champagne moment for me.  See, several years ago, when I was struggling through that job interview with The DBA?  That guy was Rodney Landrum.

He was right to turn me down, because at the time, I wasn’t exceptional.  I didn’t read blogs.  I didn’t know DMVs well.  I didn’t give back to the community.  But you, dear reader, are already far ahead of where I was.  You’re exceptional, and it’s time you threw your hat in the ring.

Previous Post
What Makes a Good Conference Session or Keynote?
Next Post
Top 10 Keys to Deploying SQL Server on VMware