You can refresh this page every couple of moments to see what’s happened.  The most recent updates are at the bottom.

You can watch the keynote live online too. 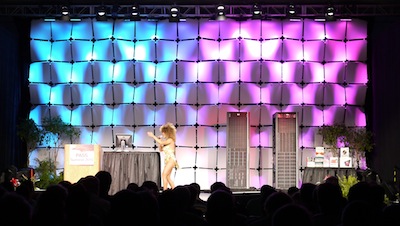 8:21AM – Today opened with Tina Turner singing “Simply the Best.”  It’s either that or I drank entirely too much last night and Rushabh opened with a musical number, I’m not quite sure.

8:28 – Rushabh keeps talking about how we’ve touched a lot of people.  I think I read about this in the harassment complaint.  They’re aiming to touch more people – or maybe be touched by more people, I’m not quite sure – by webcasting the keynote live for free.

8:35 – Microsoft’s Mark Souza is playing doctor onstage to talk about the 400+ Microsoft development team members here to answer your questions.

8:39 – Talk to Microsoft folks, and you’re eligible to win all kinds of prizes including an XBox Kinect.

8:40 – “Everybody, look under your chair – if you’ve got an envelope, you just won a Dell Alienware laptop!”  Dang, all I got was chewing gum.  And of course you know I just felt under there without looking.  Ewww.  I won some used chewing gum. 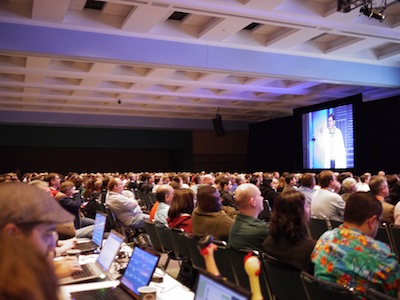 8:46 – Playing a video explaining the history of SQL Server.  Best quote so far: “I figured if I could build an even halfway decent database, Microsoft could sell the heck out of it.”  Oh, the jokes are just zipping around.  This is a great video, though – really helps build a connection with the people building this tool, makes them personal and identifiable.  This is one of the best marketing-ish videos I’ve seen.  Nice work.

8:49 – Ted Kummert took the stage, and immediately started off by saying that a lot of the SQL Server people live & work in Seattle, and having the Summit here helps them send more people.  Oooo.  Okay, got the message there.

8:55 – SQL Server 2008 R2 Parallel Data Warehouse is now released to manufacturing.  This is a little tricky, though – it’s only sold through manufacturers along with hardware.  It isn’t available for download & testing on your own machine.  It’s sold as a big honkin’ appliance that you just plug in and go like hell.

9:00 – Demoing Parallel Data Warehouse with a 100TB copy of the TPC-H benchmark.  Eagle-eyed watchers will notice that this isn’t using SQL Server Management Studio – PDW has its own admin tool still. 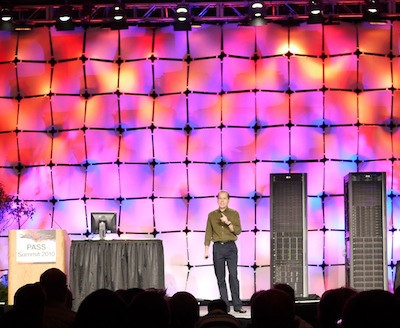 9:01 – Running PowerPivot queries to suck a subset of the billions of rows – showing off the integration between PDW, Excel, PowerPivot, etc – talking about the whole-stack story.

9:04 – Here’s my thoughts on Parallel Data Warehouse from last year’s announcements and interviews.  I like the idea, but people need to remember that it’s not managed with traditional SQL Server tools or techniques or staff.  It’s a sealed box, and you can’t do anything with it – it’s manufacturer maintained.

9:11 – Bob Ward announced & demoed Microsoft Atlanta – I’ve got a separate post with my thoughts on Microsoft Atlanta.  It’s a cloud-based SQL Server monitoring system that only works for SQL Server 2008 and R2 (and newer) that detects configuration problems. 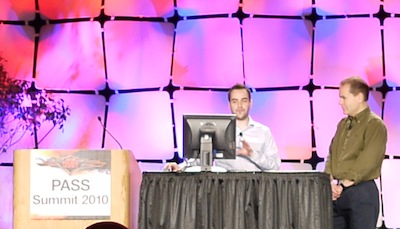 9:24 – Available now – the Windows Azure Marketplace DataMarket, something like the iTunes Store for data sets – both commercial and freely available.  They’re demoing how to add internet-accessible datasets from the DataMarket with, say, weather data, to enrich your reporting.  On rainy days, you sell less bicycles. I’m a big fan of this.

9:32 – Ted’s encouraging the audience to go sign up and get engaged in the cloud.

9:33 – “What’s Next for SQL Server?”  The next version is called SQL Server Denali for now as a code name, and I’ve got some quick information about SQL Server Denali.  They’ll be demoing it later, plus handing it out to attendees after tomorrow’s keynote.

9:37 – The changes in SQL Server Integration Services will be huge, he says – big improvements in management and servers.  R2 was a big release for reporting & analytics, plus Office 2010 focused on managed self-service analytics.  Excel users were empowered to build BI applications, and PowerPivot was embedded into SharePoint.

9:39 – Project Crescent is a new web-based reporting system letting end users tell their own stories about the data.  Amir Netz is demoing PowerPivot, then saying that’s good, but we need something bigger for enterprise datastores.  The new BI Development Studio, running on top of Visual Studio 2010 Premium, hooks into the same column-oriented storage engine that PowerPivot used, but now you can use it on a server so you get centralized security and bigger horsepower. 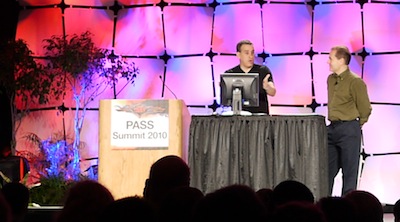 9:49 – SQL Server Denali will have columnar indexes built into the database engine.  Columnar indexes are what makes PowerPivot so insanely fast.  More on this later.

9:52 – They’re demoing Project Crescent to build reports.  Unfortunately, I gotta bail – off to set up for my session!