Microsoft just announced the release of the next version of SQL Server, code named Denali, at the PASS Summit in Seattle.  The Community Technology Preview (CTP) version, somewhat like an early alpha or beta release, is available for download now to MSDN members.  It’s available in both 32-bit and 64-bit versions, and it shows up as version 11.0.1103.9.

After installation, here’s what the launch screen looks like for SQL Server Management Studio, which gives away the first clue of changes: 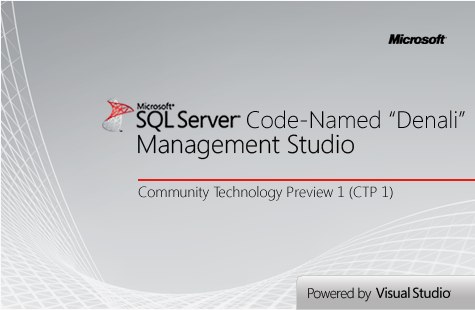 Deep, calming breaths.  Despite the “Powered by Visual Studio” label, SSMS hasn’t changed dramatically since it was originally introduced back in SQL Server 2005.  After seeing the terrifying splash screen and logging into a server, we’re met with the traditional user interface seen below. 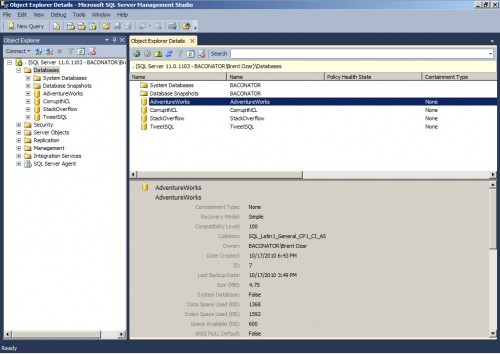 There’s one tweak that pops out right away: there’s a dark blue background around the edges of the window panes.  There’s just enough to be familiar and comforting here, but Visual Studio users will recognize the hint – the objects on this screen can be undocked!  Simply grab hold of Object Explorer or Object Explorer Details, drag them away from SSMS, and presto: 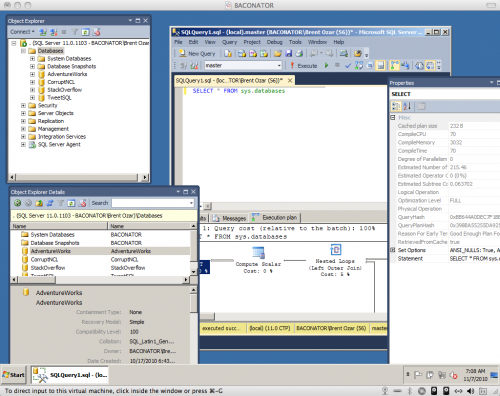 LET MY WINDOWS GO THAT THEY MAY SERVE ME

Welcome to 2010, people – we’ve finally got multi-monitor support for SQL Server Management Studio!  We can tear windows off and drag them off to different monitors.  This new Visual Studio based user interface brings some baggage with it, though – Visual Studio users will note that over some remote desktop connections, WPF-based apps can be slow or downright unusable.  Microsoft has blogged about ways to improve Visual Studio performance over RDP, but it’s still a sore point for many users.

The “Denali” branding is everywhere in this early CTP, and I’m not sure what the final release name will be – SQL Server 2011 would follow the previous naming conventions, but even the database versions on the database properties page show up as Denali:

Keen-eyed readers will notice a new “Containment type” option on that page, and there’s plenty of other goodies scattered through the UI that hint at improvements under the engine’s hood.  One of the more interesting to me is a new Distributed Replay trace utility to push a lot of load from different computers simultaneously, all controlled from a central computer.  Stress testing SQL Server has been painful without getting third party tools involved, and now it looks like we might have something in the box to give us a hand.

From what I’ve seen so far, though, this release mostly represents a set of incremental improvements, not a dramatic shift like we saw from SQL Server 2000 to 2005 – mostly.  There’s one change that’s got me dancing on my chair, and it deserves a separate blog post all by itself – Denali’s new High Availability & Disaster Recovery options, aka HADRON.

You can download SQL Server Denali (2011) CTP1 today for free.

Brent Ozar Unlimited Team
Brent Ozar Unlimited is a boutique consulting firm focused on understanding your environment and strategy. We partner with you to objectively identify pain points and develop solutions that align to your business goals. Your experience comes first; we share our knowledge and expertise to help you.
Previous Post
Conferences and WiFi Security
Next Post
My Latest Experiment: #SQLPASS Free-Con