I just got my MVP prize package in the mail.  The package is artificially big – it’s 95% cardboard, 5% content – but that’s because the really good stuff doesn’t come in boxes. 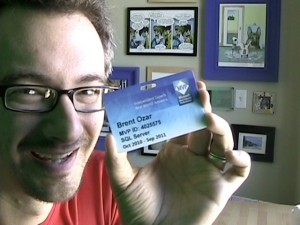 Do you know me? That's why I carry this.

MVP awardees get a lot of free software licensing from not just Microsoft, but other software vendors as well.  All of the SQL Server vendors give MVPs free individual licenses for most of their software, but it gets even better.  Remember that the MVP program spans more than just SQL Server – vendors like VMware and TechSmith (Camtasia) support the MVP program too!  There’s no way I could do as much community work without the help of these vendors, because my home lab is totally licensed thanks to them.

MVPs get access to some internal resources at Microsoft – things like webcasts about upcoming software changes or improvements.  I’m hesitant to say that MVPs get access to Microsoft team members, though, because the public can get that same access.  Microsofties won’t give you NDA information, but they’ll come to the public via blogs or conferences and ask for your opinion on how the software should work.  Heck, anybody can just go to connect.Microsoft.com and submit ideas or changes they’d like to see.  I’ve never had a Microsoft person say to me, “Well, I thought your idea sucked, but because you’re an MVP…”  (Actually, they just stop after that first part of the sentence.)  I’m not bashing the MVP program by any means – I’m saying that unlike other vendors I know and love <cough>Apple</cough>, the public can participate (somewhat) in the development process.

The biggest benefit by far, though, is communication with other MVPs.  Your fellow MVPs are interesting people doing interesting things with Microsoft technology.  They aren’t necessarily the smartest or best users of a particular product, but they’re the kinds of people who are willing to talk with you about what they’re doing.  They’re helpful to the community and to each other.

You would imagine that Microsoft, being the vendor that brings us such killer communication tools as SharePoint, Outlook, Exchange Server, Messenger, Office Communication Server, and RoundTable would really pull out all the stops when it comes to helping MVPs communicate with each other.  You would be wrong.  Until recently, we had an NNTP newsgroup server, and now we’ve got an email distribution list.  It’s not the sexiest method of communication, but it works, and I love being a fly on the virtual wall when these people get into passionate arguments about niche features.

If – or when – I lose my MVP status, the one thing I’ll miss is that email list.