How I Make Coffee and Servers

I’ve got a disturbing array of coffeemaking gear: 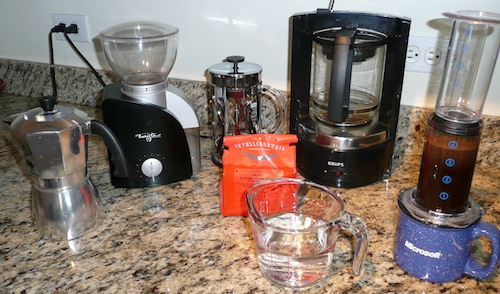 From left to right:

The AeroPress produces by far – by FAR – the best coffee, but when I get up in the morning, I fire up the Krups Moka Brew and make a pot.  I sacrifice flavor for ease-of-use, because I need more than one cup and I’m trying to get a lot done in a short amount of time.  I need to feed the dog, take her for a walk, check my emails, cook breakfast – okay, well, assemble breakfast, which usually consists of granola and yogurt.  I want to brew enough for me to have a couple of cups, plus Erika needs a couple of cups, plus a cup to-go for work.

Every now and then, in the afternoon, I’ll brew a cup of coffee with the Aeropress and savor every sip.  The rest of the time, though, I just can’t afford to micromanage my coffee one cup at a time to get it absolutely right.

That’s Why I Love Virtualization, Too

Most of the time, I need to get a database server up and running as easily as possible.  I don’t want to completely sacrifice all semblance of security, performance, and manageability, but I don’t have all the time in the world.  I can’t usually fine-tune every hardware setting like SAN multipathing, network card load balancing, failover protection with clustering, and so forth.  I just need a core set of basic hardware up and running to service the company’s needs.

I deploy a virtual server with a few mouse clicks, and presto, we’re off and running.

If I need high availability, disaster recovery, snapshot backups, or any number of common datacenter features, I just tell my virtualization sysadmin, and they’re handled.  Even better, they’re handled exactly the same way across all of the company’s servers, which makes management easier.  Don’t get me wrong, I still double-check what they do – like Ronald Reagan said, “Trust, but verify.”

When I need to wring every last bit of flavor performance out of a SQL Server, then sure, I build a finely crafted physical server for it.  But the rest of the time, I use virtualization by default, because it’s gotten good enough.

Brent Ozarhttps://www.brentozar.com
I make Microsoft SQL Server go faster. I love teaching, travel, and laughing. I live in California with my wife Erika.
Previous Post
How to Use sp_WhoIsActive to Find Slow SQL Server Queries
Next Post
The Microsoft MVP Program