If you’ve got performance troubles with an application that stores data in SQL Server, and especially if it’s a home-grown application (not a store-bought app), you can get dramatic performance improvements simply by focusing on some basic indexing techniques.  These tips and tricks pay off more than pouring money into hardware that might look good sitting in the datacenter, but doesn’t really make the application significantly faster.

When I go into a shop to speed up an application I’ve never seen before, two of my favorite quick-hits are from the index performance tuning queries from SQLServerPedia:

I’m not going to cover those in detail this week because I’ve already recorded tutorial videos over at SQLServerPedia for those, but I do want to focus on something these queries won’t pick up.  Sometimes a table has two nearly-identical indexes, and they’re both being used for reads.  Take these two: Performance Tuning 201 - Even Wood 2x4s Can Be Spoilers

They’re two different indexes, and they’re both getting used – but does that mean we need them both?

In cases like this, I prefer to drop that first index and let the slightly bigger index pick up the slack.  Reading a slightly larger index will take slightly more time: if a query didn’t need that QuotaItemDriverID field, it still has to pull it off the disk in order to perform the query.  However, dropping the index pays off during inserts/updates/deletes, because it’s one less index SQL Server has to manage.  It also makes the database smaller, thereby making database maintenance tasks smaller/faster.

Then I’ll drop the shorter index with extreme prejudice.

When Indexes Have Include Fields

If they have “include” fields, then I’ll merge the include fields between the two indexes to make one index to serve both needs.  Say we have these two indexes:

In this example, I tacked the YTDRevenue field on to the end of the include field list.  The order of the included fields doesn’t matter, since SQL Server doesn’t sort by those. Things to Watch Out For

In my examples, I kept things simple by omitting all of the extra indexing options like partitioning and sorting in TempDB.  When doing index tuning in real life, though, you’ll want to check those options to make sure they’re consistent from index to index.

Field order matters in indexes; if two indexes have the same fields but in different order, that doesn’t mean you can drop one of them.

Ideally, after making index changes, we would restart the SQL Server instance to reset the DMV counters that monitor index use.  In reality, though, that’s not so easy to pull off, so we need to log our changes to understand what the changes have been.  After making index changes, log the changes somewhere. I keep the output of the index performance tuning DMV queries in Excel spreadsheets because it’s easier to email those back and forth from machine to machine, especially when I’m consulting. The next time you do index performance tuning on the same database, you can use the historical spreadsheets to determine whether or not your changes worked the way you’d planned. 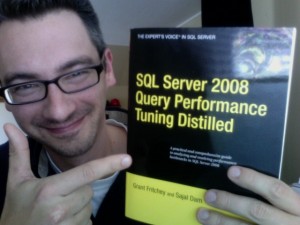 I really like Grant Fritchey’s book SQL Server 2008 Query Performance Tuning Distilled, and I wrote a book review about it.  I can’t recommend it highly enough, and I’d start there.

If you don’t have the patience to wait for a book, here’s a few more blog posts about performance tuning:

Performance Tuning with Perfmon – how to set up Perfmon, what SQL Server Perfmon counters to track what the indicators mean.

Data Mining Your SQL Server Perfmon Counters – want to take your Performance Monitor statistics to a new level? I wrote an article on SQLServerPedia explaining how to use Microsoft’s free Table Analysis Tools for the Cloud plugins to dive deeply into your data.

Primary Keys and Indexes – I explain the concepts behind keys and indexes using phone books as an example. Indexes have huge impacts on performance, and if you master these you can make your server go a whole lot faster without spending more money.

SQL Server 2005 Setup Checklist – some simple configuration tweaks can get you 20-30% performance increases right from the start without spending any extra money.