Switching from coffee to tea

This presented a few problems:

A few DBAs on Twitter were talking about their love of teas, so I did some research and fell in love with the Adagio Teas web site.  They offer things that make it easy to get started with teas, like:

I had no idea what I’d like, so I picked up a starter set of black teas and a couple of sampler packs for around $60 total.  It seems like a heck of a lot of money when you can go to the supermarket and get a box of tea bags for $2, but if you’re a coffee addict, think of it this way: you can’t buy a decent coffeepot for $60.  (Yes, cheapskates, you can get a Mr. Coffee for $15, but if you’re drinking coffee out of that, you’re not really an addict.) 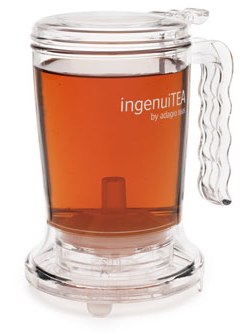 Golden Monkey is a great tea for coffee addicts.  It’s got a dark, complex flavor that reminds me of coffee.  It doesn’t taste like coffee, mind you, but if you’re a coffee addict that appreciates dark, subtle differences in flavor, you’ll probably like this.  It doesn’t have that pleasant coffee aroma by any means: one of the reviewers on Adagio said it has the flavor of warm mushrooms, and I’d say that’s a good description of the aroma too.  This one does have caffeine.

Rooibos Earl Gray is amazing. Rooibos is an herbal tea, not a real “tea” in the traditional sense, but I wanted to try it because it’s caffeine-free.  If you’re just getting started with teas and you’re thinking about avoiding caffeine, it makes sense to start with Rooibos since you won’t know what you’re missing.  Earl Grey refers to tea made with an orange oil, and Adagio’s Rooibos Earl Grey throws in some orange rind as well. I tried several black teas before I tried an Earl Grey,and when I first smelled the Earl Grey, I think I actually said “Eureka!” out loud.

They’re serious when they give temperatures and brew times. Adagio’s tea containers have the water temperature and steeping times printed right on them, making it easy for tea n00bs like me to do it right.  Let the tea steep too long, even just a minute too long, and it tastes bitter and nasty.

The ingenuiTEA teapot makes the experience more fun. I like having a clear teapot, watching the leaves blossom and color the water.  Part of the joy of coffee and tea is the brewing experience – this is the same reason I used to like my Bodum Santos, a vacuum-driven coffee pot. It was just fun to watch.

I’m not swearing off coffee – it’s still my favorite beverage, but now I have a pleasant alternative I can use while I’m telecommuting in Michigan.  When I get back to Houston this fall, I’ll probably settle back into my old ways at Coffee Groundz.