My endorsements for the PASS Board

When I was a DBA, before I got this “rock star” job, I didn’t have the time to get involved enough with the SQL Server community to really know the people running for the PASS Board.  I had a “real job”, and when I cast my vote, I was basing my decision off a paragraph or two of information about the candidate.

Now that I have a “fake job” where I get to spend time in the SQL Server community, I have the time to get to know more people.  If I was you, and I had a “real job”, I would want to hear a personal opinion about the candidates.

So here’s who I’m voting for: 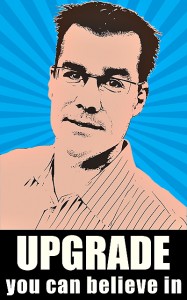 Tom LaRock - Upgrade You Can Believe In

Yes, I just outed SQLBatman on my blog, but if I was a voter, I’d want to know the man behind the mask.

Tom is funny as hell, as evidenced by his virtual campaign poster.  I first met him at a Quest event for customers, and we hit it off right away.  Everybody found it easy to talk to Tom – he’s a natural conversationalist – and to me, that’s really important in a SQL Server community leadership position.  You want a person in there who you can just walk right up to, start asking questions, and get relaxed, funny answers.

He ran into problems with one of my favorite Quest products, but he didn’t just say, “This thing is borked” and throw it back at us.  He took the time to trace the SQL the product was running, look at how it was working, and suggest a couple of indexes that would improve performance under load.  He implemented it on his own lab systems, tested it, DOCUMENTED it, and passed it on to us.  He documented it.  Think about that for a second.  How many of us write documentation on our OWN stuff, let alone a vendor’s?!?

His attitude shows in his written communications, too.  Check out Tom’s Twitter stream.  Regardless of whether or not you use Twitter, you have to appreciate how involved he is with other SQL Server professionals, and how easy he is to work with.

That right there – the Twittering and blogging – are big reasons that I’m endorsing Tom LaRock for PASS Board.  I think it’s important for the future of PASS that we bring more DBAs closer together because it gets our SQL Server questions answered faster and makes our jobs easier.  At the end of the day, that’s why I get involved with the community – to help other people get their jobs done easier – and I think Tom does too.

When Tom told me he was running, I asked him a few questions about why he was running, whether or not he’d have the time, and so on.  We had so much fun that he asked if he could combine the emails into a blog post about why he’s running for PASS Board.

Disclaimer: I’ve never met Douglas in person, only over the phone.  He may smell like a Newark telephone booth on a hot day.  I reserve the right to revoke this endorsement should I determine that to be the case.

I first interacted with Douglas only recently – when we asked him if he’d like to be the BI Editor at SQLServerPedia.  Of course we picked him for the quality of his work and his track record with the SQL Server community, but that’s not why I’m endorsing him here, because all of the nominees have awesome track records.

I’m endorsing Douglas because of a skill he’s repeatedly demonstrated in every interaction we’ve had: the ability to quickly dissect topics he doesn’t normally deal with, find the problems, and communicate them in a non-threatening way.  He really displays an analytical mind that doesn’t just try to comprehend what you’re saying, but what you’re NOT saying, and what made you come to your conclusion.

That’s important to me in a PASS Board member because board members have to deal with a lot of ideas coming from every direction.  It can be an exhausting job of taking suggestions that might be brilliant – or really crappy – and they have to figure out the right direction to take the SQL Server community.  That’s why I’m voting for Douglas.

What About The Other PASS Board Candidates?

They’re awesome.  Seriously.  There’s nothing negative I can say about the rest of the nominee list – these are all people who devote their time to educating and serving the community.  There’s other people in my circle of friends that are going to vote for other people.  I know Andy Warren’s gathered a lot of buzz, and very rightfully so – read Andy’s blog entries about the PASS process, and you have to love the transparent approach he takes with it.  There are a lot of good people who want to help others by serving as a PASS Board member, and we have the luxury of choosing from great candidates.  (Sure beats the political elections I’m used to.)

If I had something negative to say about any of the candidates, believe me, I’d say it.  Don’t believe me?  Go search the web for SQL Server 2008 sucks and see who comes up.

How to Vote for PASS Board Members

Check out this page explaining the PASS Board of Directors election process. If you get an email, vote.  If you’re in Seattle for PASS, swing by the voting kiosks.  But whatever you do, vote, because it really does make a difference – last year, the difference between winning and not was 13 votes.