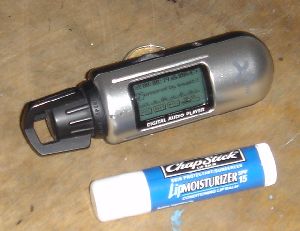 My purchasing philosophy is to either buy the best designed product out there, something that’s going to last ten or twenty years, or else buy the all-out cheapest thing that meets my needs. Everything in between usually involves too many compromises, and I end up wishing I’d saved my money or else I pine for the higher quality one.

Podcasts are like this blog that you’re reading, only they’re audio files instead of web pages. People record regular “shows” in MP3 format and put them up on the web for other people to download and listen to. And, yes, like this blog that you’re reading, most of them aren’t that terribly interesting, made up of personal drivel and low-rent opinions. I don’t really care what Sam Smith in San Antonio says about his family or his computer.

However, there are some podcasts with high production quality, just about to the level of radio shows. And since podcasting is dramatically cheaper than running a radio station, there’s a great variety of podcasts about even the narrowest of topic ranges. For example, I love to watch Survivor. (Yeah, I know, I know.) Every week, after someone’s been voted off, there’s a long show with the recently booted contestant being interviewed. When I’m walking the dog at 6 AM, before the coffee’s done brewing, this is exactly the kind of intelligence level stuff that I need, and about all I’m ready for. Russell Holliman does the Survivor world a favor by making a podcast out of this, with the commercials clipped out.

Russell has a podcast of his own, covering computer happenings and things around Texas. His would probably fall into the vast numbers of podcasts I’d never hear except that he lives near me, has similar political leanings, and has a couple of computer toys I want – a Mac Mini and a Treo phone.

Back to my purchasing philosophy. We already have an Apple iPod in the house, a gift to Erika for her last birthday. Well, I mean her most recent birthday – I certainly hope it’s not her last. The iPod was the quality piece of gear, the best thing out there, and a purchase I’m certainly glad we made. But she uses it most of the time, and I wanted an MP3 player of my own so I could listen to podcasts in the morning. I went down to Fry’s to pick up the cheapest MP3 player available.

I settled on a WaveXDigital TS-300, amusingly shaped like a little bomb. Time for a quick review. For $40, it came with 128mb of memory, an FM radio, and voice recording. 128mb is enough to store a few hours of podcasts, because they’re recorded at low quality – they’re just people talking, generally speaking, so you don’t need CD-quality audio. I wanted the FM radio so I could listen to KUHF, my local public radio station. I gotta be honest: that is literally the only radio station I listen to. I don’t even bother with presets on my car radio – I just never change the station. The voice recorder does what it’s supposed to, which is handy for morning walks when I remember things I should have done earlier. Oops.

The TS-300 has some drawbacks, though. It’s powered by a single AAA battery, but it won’t recharge that battery through the USB cable. I figured I’d just plug it into my computer’s USB port, sync some music, and leave it plugged in to charge. No – I have to swap out rechargable AAA batteries myself. Not a big problem, but just a bit of a nuisance.

Even worse, though, is that leaving the TS-300 plugged into your computer doesn’t charge the battery – it discharges the battery! The TS-300 uses power while it’s connected via USB. I left it plugged in to set up some automatic file copying from my computer to the MP3 player, and came back to find the battery dead. I would have thought it’d use power from the USB cable, since it’s plugged into my computer which is providing power, but no – even when it’s plugged in, it’s burning up the battery. Not too smart.

The most serious problem is that when you turn it off and then turn it back on later, it doesn’t keep track of where it left off. Podcasts are long – anywhere from 10 to 60 minutes – and I don’t want to start back up again at the beginning of a podcast every time I go out for a walk with the dog. So if I go for a fifteen minute walk in the morning, I have to remember where I left off in the audio track, and then when I walk her for lunch, I have to spend a minute fast-forwarding to that same part of the track. LAME.

But for $40, I can live with it. And it makes the time fly by when I’m walking the dog. I used to get antsy after 15-20 minutes, but now I find myself letting her run all over the park, and 30 minutes has gone by without me even noticing.