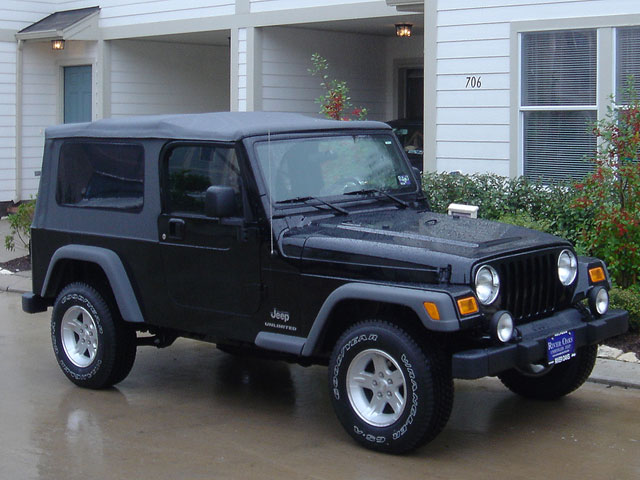 When I was in high school in Michigan, we had a black Jeep CJ7. I loved it – I thought it was fun, rambunctious, and laid-back. I remember driving Melinda Scott around in the snow, thinking I was king of the world.

A few years ago, when I moved to Texas, I briefly owned a dark green Jeep Wrangler Sahara – much cushier than the old CJ7, but just as much fun. Equipped with cruise control, a nice carpeted interior, and a stick, it made for even more fun.

Yesterday, I gave in to temptation and bought a new one, a black 2005 Wrangler Unlimited. This one’s longer than the others, a new model that adds a couple of inches of rear legroom and a whole lot more cargo space. The long rear side windows look way too big, and I wish they’d have added some style back there, but I’ll rarely have the top up anyway.

Except today, of course, because it’s raining. That’s the way life works. Into every life a little rain must fall.

Because I was buying it new (ouch), I didn’t get it loaded all the way. I just wanted an automatic so Erika could drive it, and I wanted cruise control for the trips up to Dallas. What a contrast from my Volvo: no power windows, no power locks, no power mirrors, no power seats, horrendous stereo,

The thing I miss the most from the Volvo, though, is the stereo. Volvo C70’s have killer 10-speaker setups from Dynaudio, a high-end European company. Man, I forgot how bad stock stereo speakers sound. On the way home from the dealer, I kept cranking up the new live Better Than Ezra CD, only to turn it back down because the distortion was so bad. Argh. Well, you don’t want to sink a lot of money into a Jeep’s stereo because somebody can just unzip the top and make off with your goodies. Still, there’s gotta be a better medium than this.

Listen to me complain! Jeez. Time to go take the Jeep out and play in the puddles!