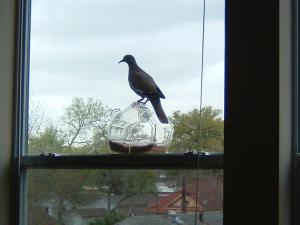 Moving right along – I have a bunch of tools set up, and figured I’d take a chance on the digital camera. Plugged in my USB flash card reader, and sat there like a dummy waiting for Xandros to do something. Uhhh, news flash, Brent, Linux doesn’t quite have the automated tools available in Windows XP, where the operating system instantly recognizes that you plugged in a card from a camera. XP is so gracious about this sort of thing, immediately offering to save the photos for you in your My Documents folder and delete them from the flash card.

After it set in that I’m on my own here, I went into File Manager, and sure enough, a few new removable drives showed up. Not bad, but there was no visual indication as to which drives had media – you had to click on each of them until you figured out which one had the card in it. Still, progress. I edited this picture with The GIMP and presto, we’ve got images.

I’ve gone through several other applications and had a similar level of success: the high polish I’m used to with Windows XP isn’t there, but the basics are in place. For example, I’ve got the Citrix client installed, but when I hit our Citrix web site, it says my client isn’t installed, and Mozilla doesn’t seem to know how to handle the ICA files. I’ve tried telling it to use the Citrix client manually, but the client errors out. I know I’m close, but there’s something missing. I haven’t bothered Googling for a solution yet.

Overall, I’d say that Xandros 2.0 is like the early days of Windows NT4: it works, but it’s not exactly intuitive yet, and it’s going to be a few years before you’d hand the CD to a novice and tell them to have a go at it. You can tell it’s a quantum leap forward under the hood, though, and it’s just a matter of time before the chrome is bolted on. In the meantime, user interfaces aren’t consistent from application to application, and most of the time, when I’ve got a question, the answer isn’t apparent from the documentation or the application.